I may have written about this before, many years ago a friend referred to my past and my baggage as a complete matching luggage set.

Recently I have been undertaking counselling for my anxiety and depression,  which in turn has lead me to get this lovely (not) large set of cases out of the dark parts of my mind.

And I have not been enjoying dusting them off or opening them up.

However, the past can have its uses.

It can on the surface have perfect vision.

It can also offer comfort.

It is behind you with no re-entry allowed.

It is interesting to think that it can hold the keys to unlocking the future though!

Yes, this post is full of metaphors, but what can you expect at 2.30am after an evening of reflection with friends?

It was not an evening fuelled with alcohol, although maybe too much ginger ale Fizz?

As part of my current therapy sessions I am looking at and deconstructing my own core beliefs, my rules, my ‘coping mechanisms’ and eventually this will lead to breaking habits of a lifetime and learning to change, learning to give myself some slack and to (probably most importantly) be able to spot when I am falling into old habits; being able to break them.

After all ‘rules are made to be broken’ (last metaphor I promise!)

Anyone who has undertaken the NHS’s iTalk therapy will have an understanding of what I am talking about.

It is based on CBT – Cognitive Behavioural Therapy.  A therapy that I did learn of during my own counselling courses, but not one that I followed in great detail…. for the NHS is is a good therapy, it is one that can be provided on either a face to face basis (which I have) or over the phone, saving many ‘man hours’ overheads along with additional anxieties for some who are in receipt of the telephone consultations.

CBT is largely known as a talking therapy, it has many different ‘formulations’ so can be tailored to an individual needs much easier and quicker than some other therapies. 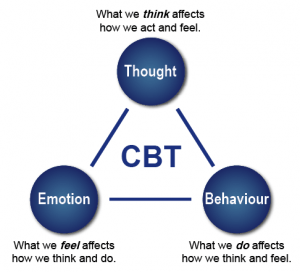 It is a fascinating therapy and one that I am only just learning.  However it is one that I can already see as a great working theory that has so much to teach me.

So, watch this space……. I may find a way to expand on this soon.

Would you flip a coin on it?

This is a much more personal and private post.  One that I have thought of writing for some time, yet not found the courage to put it into words.  This is true, raw emotion.  Please comment if you wish.

Sight loss, hearing loss, illness, disability; all of these can affect your mental health and mood.

I have battled with depression for many many years.  It isn’t (for me) something that is fixed by medication.  In addition to being a trained counsellor myself, i have undertaken many various forms of therapy; from CBT to mindfulness and many in between.  Depression isn’t easily or quickly fixed.  It often takes many ‘trial and error’ theories, after all as a human, I am in my own way unique.

My sight is degenerative, and in recent months I discovered that my hearing is also digenerative. This by its nature means that I have not as yet come to terms with it.  With the world around me ever changing (because of how I can see and hear it). I find many of the new challenges upsetting and difficult to deal with.

In very recent months I have found this particularly hard.

I found myself thinking and analysing everything much more.  This found me in a very low, downward spiral.  A spiral that I could find no way out of.

This was compounded from my current therapy sessions I have been undertaking with iTalk.  By looking at many of my demons up close and personally, I found it all too much.

A question Doctors and counsellors ask,

Do you feel like hurting yourself or that you would be better off dead?

I could answer this, my answer was always “No.” not because I was lying to them, but because it wasn’t the right question.  Had they asked:

Do you think everyone would be better without you?

They would have got a completely different answer.

I never sat down and thought of it as dying, committing suicide or harming myself.  I thought of it instead as improving others lives.  By not being here they could all get on with living, my children wouldn’t have to worry about me, they wouldn’t have to ‘miss out’ on doing fun things, because I am not able to drive, or run around with a ball.  They would also no longer have to cope with going between me and their dads.  Especially Lawrence, who seems to be particularly sensitive and worried about saying something that may upset me.

That they would be much happier not having to help a disabled mum.

I thought my best friend would be happier too.  Instead of having me bother him with texts and emails, he could live his life, enjoy his children and make a future for himself without me being like a noose around his neck.  Someone he felt obligated to ‘put up with’, someone who had made the mistake of being nice too at a difficult time and getting stuck with.

Without me, he could be happy.  Me not being here would be one less stress for him in his already stressful life.  And I felt similarly about other friendships.  I don’t have any family, they have already told me how they don’t want me.   So I thought I would be making the best decision, I thought I had decided that it was best for everyone if I just  wasn’t here anymore.

I shut myself off, I lied to friends who asked “how are you?’

I kept putting things off, I didn’t walk the dogs, I didn’t do the housework, I didn’t write in my bullet journal.

I did however call Samaritans.

I apologised for wasting their time, I spend just under 3 hours on the phone to a woman who said her name was Beth, she asked me about my family, my home, my children.  We talked for a long time and I can’t remember most of it.  I remember there were lots of tears, lots of apologies from me (anyone who knows me well will tell you how good I am at saying sorry-when actually I don’t need to)

Speaking with Beth, I found myself feeling I ‘needed’ to go to my counselling appointment in the morning.

For each counselling appointment I am asked to complete an online questionnaire.  And for the first time in about 10 days.  When I arrived at my appointment, my counsellor asked me about my questionnaire answers and scores.

She asked me WHY?

And then she did something I never thought I would ever hear, it is most definitely not something I came across in my counselling training  (although, I haven’t yet completed my degree level)

She asked me to score on a level of 1 to 10 how much I wanted to ‘not be around anymore..

She asked me how I thought about doing it?

I didn’t know that bit, although rationally I told her I didn’t want someone who knew me to find me, I told her I wanted it to be a doctor or nurse, or someone else who has been trained to see dead people.

She asked me if my children would understand?

No, they wouldn’t understand.  But after the initial upset, they would grow up with their families and be happy without me.

And then, she said this:

You say that you are over half certain that people would be better off without you here? So lets flip for it.  Heads you end your life and Tails you carry on.  Shall we do that? Leave it to the flip of a coin?

In my head I was thinking ” Are you wanting me to do this?’ But what I said, was even a shock to me,

NO! You don’t decide this on the flip of a coin.  That is just stupid, deciding on something so final and leaving it to chance.

She then abruptly changed the subject and asked me what I found relaxing.  And we spoke no more of it.  We didn’t need to, because even though the conversation had been upsetting, the reality of my thought hit me as if i had walked into a lamppost.

Focussing on relaxation and choosing a list to pick at least one thing off each day, made for a much more enjoyable week.  I also had my charity climb to do.  I still couldn’t keep much of my food in, but I had made sure I drank plenty.  And although scared and feeling I was a failure, the climb was not just an event I HAD TO DO, it was the ultimate metaphor….. THE ONLY WAY I COULD GO AND UP I WENT.

I returned to my counsellor again after the climb, again completing an online questionnaire before going.  And this time my counsellor commented on the reduction of my scores and improvements.

My counsellor asked me to recap on what had happened in our previous session, she asked me what had changed?

So, I told her, I told her how I initially thought the previous week that she had actually been trying convince me that I should end my life, but that when I had calmed down, when I had thought about it and when I had relayed some of it (I couldn’t face telling her all) to my friend, that I had actually realised what the purpose of the direct questioning had been.

My counsellor confirmed that she too had reflected with her supervisor on our session, and how she had been able to tell that although I was upset that this form of directness was actually making me think.  She was never mocking me, or thinking me stupid.  She was simply facilitating me to think.

She also explained that had I answered differently to the question of flipping a coin, that she would have instantly notified her supervisor.  Putting in place several safe guarding options. This is something she had told me about in our very first session, as she had explained that both her safety and my safety were key.

In addition to seeing my counsellor, I have been on half weekly visits to my GP.  I explained my session to her, to which she was impressed and felt that she would take that back to her fellow doctors.

Suicide and the thought of harming yourself or wanting to ‘stop getting in other peoples way’ is not an easy conversation to have, it was not easy for me to admit these thoughts, this feeling, it is not ‘crying wolf’ It is a serious emotional and mental health issue.  One that you should not ever apologise for having, it is not ‘stupid’ it is not ‘weak’ it is simply that you cant see a way forward.

You don’t need to apologise for hounding your Doctor, for calling the Samaritans, turning up at your local A and E Department if you can’t think of anywhere else to turn or even calling for an ambulance.

There are plenty of people who want to help.

And help you they will.