And so it all starts again…..

One year and one week to the day of my first ever competition and I was back to do it all over again.

And in that one year and one week many things had changed.  I have most definitely changed; my climbing has most certainly improved and although my sight and hearing have had their setbacks (as detailed standing alone)    I thought I was in a much stronger position physically and mentally for this competition.

I wasn’t sure though, why I hadn’t been as prepared for the 13 hour drive that had seen us be diverted off the M6 and not arrive at the hotel until after 1am on Saturday morning.  After all, thanks to said sight and hearing impairments, I wasn’t able to share the drive with my CPC (Climbing Partner in Crime). The whole horrible job had been left to him to endure and in turn exhaust him mentally in ways, that as having never been a driver I can’t quite understand; yet one I can fully empathise with.

This year I had a bench mark; a place to beat and a score to improve upon.

This year I always wanted to EARN my podium place (not just get it by default-having been the only competitor last year!) Which although I couldn’t guarantee I wouldn’t have competition I was setting myself a personal goal to get me up on the podium.

After a bit of a wobble I found myself ready to set about the day.  My first move was a bouldering problem which was actually marked as the hardest of my 3 problems, but it wasn’t something I was aware at the time.

it was to start from a sitting position, it was also then I realised that my routes where only to cover 2 categories; interestingly the 2 categories where VI and Upper-Body Amptutee.

It happens some times that some routes are set for particular categories and not others, for example a route set for lower body amputees would probably not be suited to an upper body amputee.  And for a reason I do not understand it is often that the Vi and Upper-amputee are grouped together.

All competitors (from each of the 9 categories) had the same Boulder 1 and 2, in addition to Climb 1 and 2, but when it came to the 3rd of each problem this was where the VIs and Upper body amputees had a different  problem on each.

This meant that the queue of competitions on these routes were much smaller; hence my school girl error of actually doing my hardest first. 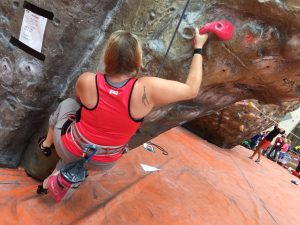 So, going backwards I then completed with a flash (getting to the top on 1st attempt) Boulder 1. 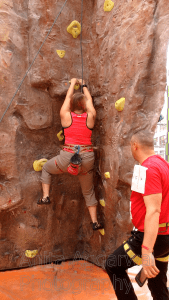 I wasn’t as successful on Boulder 2, where I misread my footings and started off all wrong, a silly error I repeated on my following attempts. 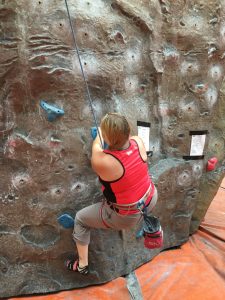 Time for lunch and freshness break for Guiding girl Fizz, who had made herself lots of friends while benched as I climbed.  And was sporting a slightly grey colour around her ears; afyerall a black dog around all that chalk isn’t the best mix! 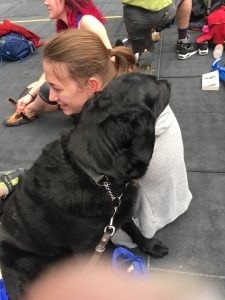 Then it was onto the climbs. (Which unlike the Boulder, you only get one shot)  Climb 1 was over before I realised, it was a great warm up climb and one I didn’t need any guidance from the ground on.

Climb 2 was a busy climb, with each and every Climber using it I got to enjoy watching (through the camera on my iPhone) the others who went before me.  It was a much higher climb, with a column and yellow holds on the grey wall.  It was time for me to climb, just as my CPC had returned from completing his 3rd Boulder (not the same as my 3rd Boulder) he told me how he had scraped his knuckle on the wall and would just need to sit and rest.  (I later discovered that he had popped a tendon and actually had to have it strapped up and imobilize his middle fingers)

So, off I went and got myself tied in for the climb.  I was about 2 m off the ground when I realised I didn’t have the support.  My ground support wasn’t there, I was on the climb alone and had to up my game and concentrate on my hands and feet.  I heard no instruction, I just had to focus and more importantly; remember to breath !!

….. Something is very easy to forget when I climb…..

It was a long climb, it was a climb that went from left side to right side and back to left, it wasn’t easy with the little contrast, but I did it.  Or I hoped it had!  When I got to the rope top (the rope didn’t finish at the top of the wall) I reached around but couldn’t find another hold, I had to just hope I had the last one, but I was worried I had missed it!)

Thankfully coming down I confirmed with the judge, I had got to the final hold and I had flashed the climb.

It was then I discovered my CPiC’s injury and worked with him to support his injury to enable him to finish his own last two climbs.

And given the shortage or judges, there was a fair wait for me to finish my final climb.  I was however able to watch two of my fellow competitions complete the climb (yet as they were both upper body amputees, their climb was different to mine…….. Even though it was the same route and wal)

It also gave me the opportunity to watch my CPiC complete his climbs too.

And this climb looked like a great contrast; black holds on a light grey wall.  I hadn’t worked out why my fellow climbers had ignored several of the obvious holds, that was until I got on the wall.

The ‘obvious’ holds were in fact not holds at all, they were black gaffer tape taping over quickdraws and other such climbing accessories.  A feature that had apparently been on the other walls too.  But as the holds on those routes weren’t black, I hadn’t even noticed them.

I took on the climb, it was most certainly a challenge.  But a fun challenge at that. I had a move planned in my head, I moved my feet to make it an easier set a ste and then ….. OUCH!

I had missed it, it was such a simple move, but one I never made, instead I scraped my elbow off the wall as I dropped quite far. (My belay has been getting ready to take up my slack, which gave me more rope, sc I when I missed the move he found himself unexpectedly giving me more rope-which was no issue as I was fairly high up the wall!)

It was the final climb though, I had no second chance and one I am proud to say that “I climbed until I fell.”  Not something I had done in previous competition; not something I had been doing while climbing in general until very recently.

And yes, I fell….. But it felt AMAZING !! I climbed until I couldn’t climb anymore.

And it got me a Silver Medal! 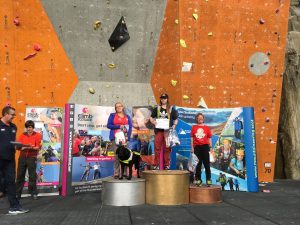 Out of the 4 competitors in my category I came second.  A medal I am more than proud of.  And can’t wait to improve on at October’s competition!