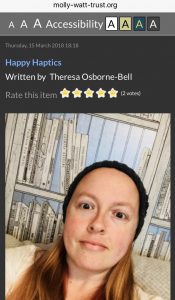 Back at the tail end of last year I was incredibly humbled to be support by The Molly Watt Trust and their Apple Watch Project.  Here is the article I wrote as a review on their blog.How is it that a few simple vibrations can give you SO VERY MUCH?

“If you had asked me the same question just a few months ago I would have probably said how I didn’t understand them.

Well, that was before I was fortunate enough to receive a Series 1, 42mm Apple Watch from the charity The Molly Watt Trust This was a piece of accessible technology I would never have been in a position to justify buying; even though I have seen the benefits others have gained from it.

So I took a chance, I applied to the charities project and crossed everything!The Apple Watch arrived at the end of November.  And after I plucked up the courage to open up the box it was like love at first sight! (If such a thing can happen with an inanimate object like a watch!)

The first fun was setting the Watch face.  Having previously had a Fitbit Surge I thought this would be easy…… it wasn’t!  That’s a bit of a fib, setting the Watch face was easy it was rather trying to decide on what ‘complications’ I wanted to be able to have for easy access on the Watch face that was the difficult part.  And it took just over a week to get the right mix, that I have continued to use ever since!i

Since wearing hearing aids in 2017 I am no longer able to wear in ear headphones, this posed a huge issue for me as an iPhone user who relies heavily on Apple maps and google maps to help support me to keep more independence.  Walking with my phone out in my hand wasn’t exactly safe either.

This is the one feature I was really excited about trying out for myself on the watch.  The ability to set a route on my phone in apple maps and then have the haptic (vibrations) go on my wrist to alert me to an instruction.

It took some getting used to, and if I am honest I tend to make use of my remaining sight to look at the instruction, but I am learning to be more trusting of it.  While my phone stays safely away in my pocket or bag.

Another feature I have found incredibly useful is text messaging.  Yes I can use my phone for most of my day to day messages (with the added support of zoom).

But if I am out and about (or even sat in a loud, busy venue) I can quickly scroll down to a pre-set message that simply says “struggling here”. This I find is enough to help raise the alert that I am not finding things easy.

This works particularly well with my friends who also have an Apple Watch, but for those who don’t, but who can quickly glance at their phones I am quickly able to find reassurance…… Or in the case of the other day; I am able to alert my friends that I have got lost on the way back to the table after going to the toilet (the waitress had kindly shown me where they were)

For me, the feeling of being safe in my surroundings is key; whether this is somewhere on my own, somewhere new or somewhere ‘different’ has always been important to me.  As my sight determinated this became event more important.  But when my hearing also started to fail me; I worried that I would loose myself with it.

In these past four months, I have felt like I have a new lease on life.  And I really do believe this is down to the support I have benefitted from from The Molly Watt Trust and The Apple Watch Project.