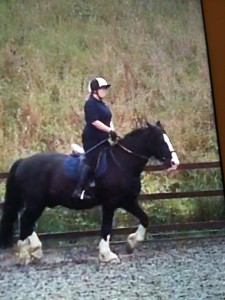 Crazy how this works. As a child and adult I had a real fear of horses. These giants could kick, bite and trample you if they felt like it.  The idea of ever sitting on one was definately out of the question.

I followed the rule that if I rode bike and the brakes failed, no-matter how painful I could always put my feet down, you just can’t do that with a horse.  Surprisingly though and even shocking to me, I began to question my previous opinion.

Think how silly it sounded, plus now was it dug a big deal?  I could Jo longer see the floor at that distance.  I finally felt that I could trust a horse, maybe this had come from the level of trust that I had learnt to instil in Vicky my GD.  Who knows!

One thing though, after that first time back many many months ago, where all I did was sit in the saddle while and instructor lead the horse ‘Tyson’ on a 20 minute walk, I was hooked.

Sitting up there on a horse I was Jo different, I was just another rider, no alterations, adaptions.  Just me and the same kit as everyone else!  I can now confidently ride at a trot, both rising or sitting. I can even tell the right & wrong footing of the horse by its feel when riding now.  A technique that I picked up purely by feel as I can’t actually see the horses shoulder to tell which foot is forward.

I chose to ride at HRTC -The Hampshire Riding & Therapy Centre in FairOak, as they cater for students with ‘life altering conditions’ and also because the are a charity, not a commercial stables.  I like the way they put it as a ‘life altering condition, as they were primarily started to educate young I diabetic children on looking after themselves with regular ssmaproteins and plenty of water just like the horses. At the stables everyone is equal, we are only judged on our riding ability and nothing else.