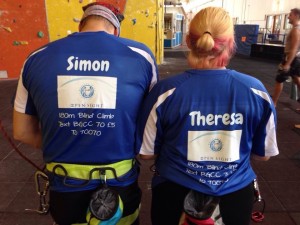 On Wednesday 17th September, me and Simon faced our challenge of climbing the height of The Gherkin. We set out to climb the 180m between us. We felt that this was a realistic challenge to conquer. 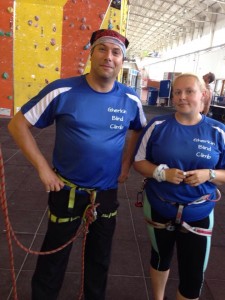 How wrong we were……

The climb equalled 90m each, on a stretch of wall we both knew well. The climb was for endurance, rather than climb technique. After all, Simon faced a bigger challenge than me. He had to climb blindfolded. I have only ever climbed blind, so I didn’t have that additional element to deal with.

We got 120-odd meters into the climb when we both agreed that it wasn’t enough. We then made to interesting if not slightly bonkers decision to continue climbing, until we had both individually climber 180m.

I say bonkers decision, as we both felt the adrenaline going at that point…. The very same adrenalin that began to wear off at around 300m.  Redbull, Kendal Mint Cake and Dextrose Tablets saw us through the last 60m….. Along with a VERY large amount of finger tape !!!!!

It was an amazing adventure. One that has left a few scars and bruises, but one that has spurred us both on to do something even bigger and even better.

So, having doubled the climb height, we are still pushing forward to ask those who wish to support us to show their support. The Just Giving page is still up and active. As is the ability to send a text donation from your phone. 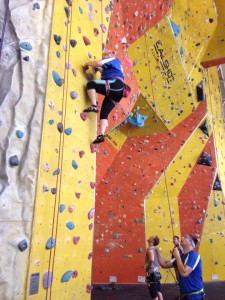