Blinded by the light

Whether it be the Manfred Mann Earth Band in 1975 or The Streets 2004 hit that springs to mind, it felt like the perfect title for this piece.

Today at a Multi Level Marketing Meeting in a lovely Portsmouth hotel, I found myself being blinded by the light.  Only in this instance it was from the bar.  A bar that, having visited several times before I had never noticed before, and from the picture you will hopeful quickly see why. 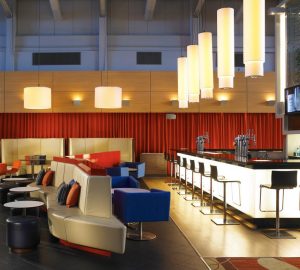 The entire bar looks like it is sat on a light box, here in this google photo it looks beautiful, but in the cold light of day in a bar where the main lighting was coming from this.  It meant that I was literally ^blinded^ by it.

Thankfully I have a guide dog who I can target with “find the bar” she managed to navigate me to a gap between the bar stools and I waited for someone to serve me.

And after what felt like Fifteen minutes, but was probably more like two the staff member who was stood behind the bar spoke!

It turned out that she had been stood their The entire time and was waiting for me to order, she hadn’t seen me approach the bar, so was not aware of Fizz, we spoke and she was very apologetic.  Asking me to take a seat and she would bring my coffee over.

So, back to my seat me and Fizz went, when just a short moment later she arrived with my coffee and apologised AGAIN (and I quote her here)

….for not introducing myself as your server and asking how I could assist you.

And explained that my coffee would be free of charge, as way of her apology.  I insisted I would pay for my coffee and she had more than made up for the mistake, but she insisted her manager had agreed that I was not to pay for my drink.

I took a photo of the view I had from my seat, I had ensured we moved away from the bright glaring light of the bar, while taking the photo I managed to get the image in a way that I ACTUALLY saw the view, along with a clear photograph of it too. 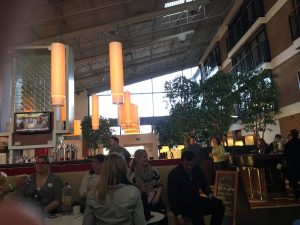 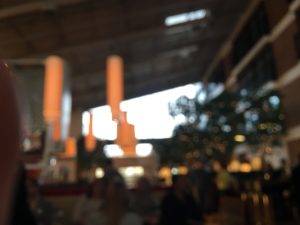 Next time I find myself at The Marriott Hotel, I shall ask one of my friends to go to the bar for me.  Because as mush as I like my coffee; I feel guilty for accepting one free of charge.

And on the subject of the soundtrack to this post, despite being in my 30’s, I am most definitely more a Manfred Mann fan than A Streets fan, so will leave you with this little bit of fun……