I would like, if I may, to take you on a strange journey.

Was the Facebook post of a friend in October.  Having only been talking with a friend about the very same show a few weeks back, there was only one answer;

So, never having seen the film, let alone the theatre production I set to work on my costume.  I grew up doing ‘The Timewarp’ I knew the background behind the story, so wasn’t going to be shocked by the performance.  But thanks to an ‘ex’ I had been put off watching it before!

He had never seen the show, just the movie….. Which he continually raved on about, being in Am-Dram himself, his not seeing the theatre show is what had stopped me watching even the film.

As you may have realised (if your a regular reader)   I am independant, some would even go as far to say stubborn.  I like to make up my own mind.  And I guess him insisting I must watch it had the opposite affect.

But now, many, many MANY years after our relationship ended I was ready to make up my own mind.

I wasn’t going to ‘spoil’ the show by watching the film first… I simply googled images from the show to see the charactors, then based upon the female cast (not the men dressing as women) I looked up quotes, from which I got;

I ask for nothing, Master.

Appealed to me, along with the maids outfit and crazy hair, there had to be hidden wonders to this gal…. And I wasn’t disappointed !!  So, Magenta was my character of choice.

I faught back the temptation to watch the film, to read the reviews, I was going to see this show ‘blind’ (Yes, pun intended!)

I hadn’t planned on the ‘blind panic’ I found myself in earlier in the day. All bought about by me going out with a ‘different’ group of friends, friends who I had enjoyed drinks with at the pub, friends I had been with at family fun days, but they weren’t friends that had ever had to support me with a long cane, in an unfamiliar environment.

Then my babysitter arrived and verbal ‘kicked my ass!’

so, wig on, costume fitted I awaited my lift.  Thankfully no public transport needed, she picked me up before heading to pick up a few others.  My calmness washed over me as we sat in the car, the others who got in complimented me on my outfit. 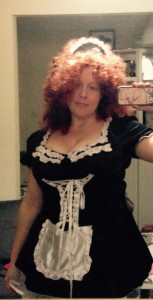 I felt even better when my ‘disability’ was able to secure us a parking spot directly outside the theatre….. Given my lack of clothes, along with the lovely gentleman who was with us dressed in very little and the cold wind that was blowing… I was thankful to have my blue badges with me!

The closer we got to the theatre, the more people in costumes we saw (when I say we, not me but those I was with) it was a fabulous atmosphere from the second we pulled up.  Others in our party were already there, they too had made an effort and gone all glam!

Our seats were in the stalls, at the bottom of the staircase, without even having to ask, one friend linked arms with me and helped guide me without making anything of it or causing me to  feel as if I was any different to anyone else out for the night with their girlfriends.

The show amazed me, the lights, the sounds and the music…. But what made it for me more was the audience participation.  The narrator had some wonderful lines with just the right pauses and even he broke character and joined in with the banter, commenting on how we were the earlier show so ‘supposedly’ better behaved.

We joined in, we sang, we danced, we laughed so hard our ribs hurt.

The show was very unique to me, I mean in the way I saw it.  With the little sight I have left, anything further than my nose is a blur.  So the lights of the show and the colours of the stage were very unique to me.

If you haven’t seen either the show or the film, even if the theme may seem out of your comfort zone. I would suggest you go see it.  And for me, not having a good view or being able to see the actors didn’t detract from it, not at all.