Time to be a princess…… 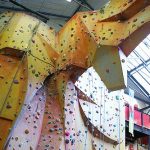 I am far too old to be believing in fairytales, although I do enjoy a nice chilled Sunday with the kids and Disney’s Tangled…. So, for a few moments I want to indulge in the fantasy of Flynn Rider and my own wonderful White Stead.

Ok, so the moment is over and here I am finding myself without a cast iron frying pan to beat off the baddies and most definitely no white stead to rescue me from these great heights.

But this is most definitely not a Disney film, I am most certainly not Rapunzel and I do not have magical hair the glows when I sing.

Instead I have the third round of competing to become part of the Team GB Paraclimbing to take part in.  And a pretty amazing building in which to do it! 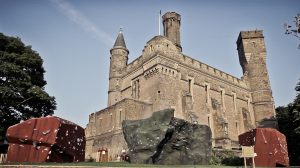 Yet again, the designer in me is amazed by the location of the climbing competition; which has been my calming and relaxation technique to save me any full blown panic attacks.

This building in particular has hit a cord, being bought over 20 years ago from The ‘buildings at risk’ register, the team have worked on following the buildings design and when money has allowed, additions and alterations have occurred.  While keeping many of the original features of the building in place. 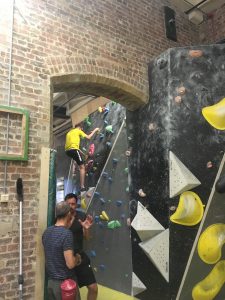 I could continue….. But for now I will move on to the real reason you are hear, reading this;  How was the competition?

In a word “challenging”

This competition felt different, it was a week day and the climbing centre was reasonable quiet, this leant itself to another issue…. That those competing had time and lack of obstructions to watch those on the routes.

The general rule of thumb when climbing is

Nobody bothers with anyone else, they are all concentrating on their own next move or climb. 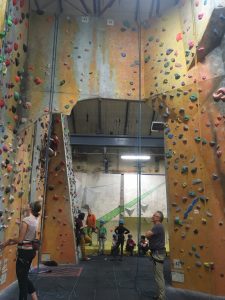 But now there was an audience, on each climb and boulder problem.  There were supporters and there were the critics.  Both could be quite terrifying.

This was my third climb out of three in the series, but as yet none of those I had competed against in my category had climbed against me.  This was no different in London!

Even with my sight I was beginning to recognise other competitors, some had been at all and some just two out of the three, a good report was beginning to build with those who had met before, for me many quizzed me over my lack of Fizz!  Having decided that travelling up and back to London in 1 day was too much for her; as her work would be minimal.

Blindness and sightloss can be a very lonely disability, yet I have always found that ANYONE at a climbing centre is welcoming, supportive and doesn’t question differences.  So when meeting with some of the other VI’s, both male and female, I found myself questioned by my own peers.  Not all, the man who gave me the courage to attempt this; Mr John Churcher and his lovely wife have been great to talk to; get information from and are very supportive.  But especially in London, I found it very difficult to ‘mix’ with others from the VI category, I didn’t feel like it was a “mixing with the enemy” issue, it felt like some of those  competing weren’t looking (pun intended) to be part of Team GB.  A concept that is completely alien to me.

You have probably realised by now, my emotions and ‘feeling’ effect my thoughts and sometimes lead me to distraction; that is what happened in Manchester, (round 2) but it wasn’t going to happen here, not in London.

So, feelings aside, I climbed my arse off!  I beat my own personal score from Manchester, yet found myself standing again on the 3rd podium. 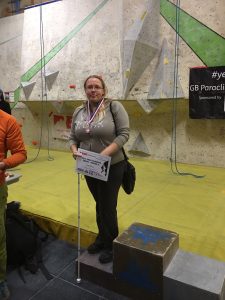 My pride took a beating when 2nd place went to a 12 year old; although not as bad a beating as I had thought when the points details came out.  The competitive side of me was over the moon to discover it was just 6 points between 2nd and 3rd. 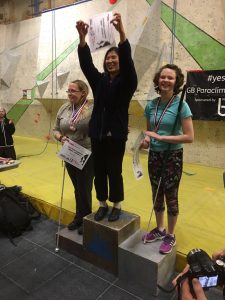 It was a harder climb, it was also only 10 days after Manchester.  So for now, I have seven weeks to prepare for the finale….. Newcastle just before Christmas !!!

Time to get some serious training in.