My personal journey that was the Great South Run

Having said I would update you on the training and how I was getting on, I let the side down. This wasn’t that the training wasn’t happening, it was just that life got in the way of me writing my blog.

So Sunday 27th came and so did the severe weather warnings!

I have to admit that throughout the training it was the rain I was worried about, not the wind. A very foolish misconception, after all the last 2 Miles of the race where along the sea front at Southsea, with no shelter. And as you will be aware if you have been anywhere near the great outdoors on that day, it was windy…. Very windy.

After an issue with my guide runner, the dog costume for the guide runner and everything coming together at the 11th hour I didn’t have the chance to be nervous about anything other than being able to finish the race.

My original guide runner was too tall for me, making him too fast in stride even at his walk pace. So, thankfully I was able to twist the arm of a friend, to join me. As a former partner, he is aware of my eye condition and my preferred way of being guided and having things explained to me. He also had a good understanding of what it meant to me to be doing such a challenge. Although I don’t think he had a full appreciation for what doing a 10 mile flat open air course would be like with a giant dog suit on!

The dog suit was another issue, the events team at guide dogs was arranging for me to have one of their costumes as the one that I had used from my local Southampton mobility team was already being used by someone else. With just 10 days to go before the race it arrived, a dog costume that looked nothing like the fat little puppy I had borrowed from Southampton, it was a very sad looking dog, with several sewing issues.

So, I went back to Southampton and asked for their help, the fundraising team were fab, they tracked me down a puppy costume that was in good condition, although missing its hand gloves, they arranged for it to be driven down from its home in Leamington and it arrived on the Thursday before the race.

It was a fat chocolate lab puppy costume, that with a guide dog race vest on looked the part. My guide would be able to play the role of being my dog after all. 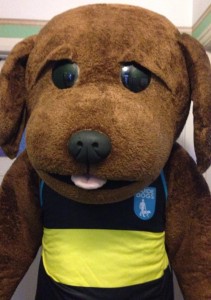 So, it was all in place and race day came. On recommendation and for ease we travelled over to Portsmouth on the Gosport Ferry, and then walked the 2 miles to the charity village for a warm up before starting in the ‘green’ heat at 11.05.

It was only once arriving on site and getting the puppy ready, putting my own cane away that the emotion of the day hit.

And oh yes, it hit…. I was in an absolute panic. Not about running the race, not about even completing the race. No, it was something that unless you have trouble with large groups or very little vision will be hard for me to explain in a way that is easily understood.

The volume of people, more that 2500 of them were also taking part, yes we were ranked in different colours depending on ability, the green rank that I was in was the busiest and saved for the casual runners, walkers and those who had never done such an event before.

I was attached by an elastic strap on my wrist to the puppies wrist and when we had trained I had done so to hold his arm between his elbow and wrist. We had trained to work at a good pace together, none of this was of concern, this I had prepared for, trained for and had control over. All the other runners though, well they were a completely different story, over them I had no control, no understanding and nor did they of me.

In such a vast crowd no-one realised that I had a visual impairment or that the dog was my guide, not just a guy dressed up for the fun of it.

So we warmed up together, moved up to the start line together and then it all started, no more time for panic, no more time to think, just time to put my complete and utter faith in my dog.

But in a way that I had never put my faith in Vicky before, I couldn’t not do it now, there were several hundred people behind us, to the sides of us and in front of us and there we were, 2 people with no where to go but forward.

My senses were on ultra high, I could sense all of the people around us, especially those behind us, but I couldn’t judge their speed or distance and with a giant puppy head, vocal commands from my guide were non existant, instead it was all done through feel, touch and gentle gestures…. That we hadn’t practiced or used before. Where he went, I did, I gave up on trying to look forward, the movement of me and others was too hard to focus on, so I put my head down and watched his giant brown puppy paws instead and followed their rhythm.

We had trained together, to run together, but like I said, nothing prepared me for this. I felt like I was a failure, another thing that I couldn’t do, but then there were the people cheering and David attached to me and I WAS DOING IT, even if I had had to walk the whole course, I would have still have done it.

The race really knocked me down, yes I should of trained more, then maybe I wouldn’t have hurt so much after, but no amount of physical fitness prepared me for the emotion and the me part of the day.

I am struggling to explain this, but it was a very large marker for me, on how I do see things differently and how I feel about them. I have never and will not shy away from doing things like this again, in fact I am already thinking of next years challenge. Which not be a running event that is for sure!

I suppose that the reality that I was only able to do such an event by being with another person, not being able to just jog through the crowds and run my own race, I had to do it with a guide. A guide who was very happy to help and happy to go with my pace without complaint. But nether the less, a guide.

The great south run for me was another realisation that I can’t just get up and do things by myself, I am different and in this instance that has caused me upset.

Its been one of the highest moments for me to say YES I DID IT, but a low also to think that I wouldn’t be able to do it alone.