Tag Archive for Guide Dog of the Year

Today is the day when Adrian Chiles, Joey Essex & many more British celebs get to meet with my gorgeous guiding girl Vicky Osborne. Tonight we join other wonderful guide dog partnerships, volunteers and staff to celebrate their achievements. In addition to the achievement that all 45,000 partnerships & 4,000 pups in training will have. To some, “they are just dogs” but to me and other GDO’s they are our independence, our guides, our eyes.

I for one as a VIP, would not even consider the train & tube journey to London today. But as a team, together, me & Vicky will fathom out Victoria station some how. And regardless of the results of tonight’s awards, she is my guiding girl, without whom I wouldn’t be half the gal I am today.

Warm, almost empty train… And off we go!!!
Whether it is a blind persons thing or any traveller. My bag has been checked, checked and checked again for travel cards, purse, headphones and phone….. Then the case, for dog food, bed, bowl and finally phone charger!

I haven’t travelled to London Victoria train station since I was a very small child, it seems just as big and scary a place now as it did then. I have the time of the next tube to get me to Kings Cross, but as the tubes run every few minutes and I am in now hurry. I set Vicky out to “find coffee”. Where she weaves me through crowds and shoppers to Starbucks. Such a refreshing break and decent coffee to plan how and what to do next.

First order on the agenda, loo for me, grass for Vicky!

Then off to Victoria Underground we go.

With the help of the underground staff and a turned off escalator we made it to our tube and along to Kings Cross.

If only she could read street signs and it would have been an easy trip from the underground to the hotel.

As I have said before, I rely on maps on my phone, 3G signal was good, head phones were in one ear and I was ready to go….. GPS however had other ideas.

London Kings Cross area is surrounded in its fair share of tall buildings. St Pancras International being one, The British Library, then there is the clock tower at Kings Cross, the office buildings, the hotels and the apartments.

It was at this point I discovered that high/tall buildings and GPS don’t mix!

But then, one thing you can be almost certain of in London is a police man or 3… All of whom were willing to walk me the 5 minutes to the hotel. They appeared most put out when I said directions would do! So a quick ruffle of Vicky’s head and off we went.

The directions were spot on, but the guide dog sense was even better…. The arrival of not 1 but 7 guide dog puppies as we were on the approach to the hotel symbolised that we were in the right place, and Miss Vicky’s wage to revert to her (never-forgotten) puppy years was growing by the second.

The hotel was simple, clean and absolutely perfect for a vip like me, no fuss, no frills and no silly unnecessarily placed furniture. We checked in, put the tele on promptly fell asleep !!

Eek….. Waking with just an hour to go before set off for the dinner, I laid out my clothes. Only to discover that I had not packed my tights….. Double eek.

So, on went the harness and off we rushed back down the road to Kings Cross to find a chemist, easy enough surely? Ummm Nope!!

We made it to the chemist, we located the assistant and got the tights. Then upon leaving, the reality of it hit me. The light was going down, I was in London, not entirely sure of which street I had to take for the hotel and I only had 45 minutes to get back, shower and change before te coach left.

This was where Vicky came into her own. She seems to know what I wanted and where it was. So with a great tension on the harness I let her lead the way, through the crowds rushing in and out of the tube station, patiently waiting for the beep of the crossing despite others rushing through the traffic built up. We were off and in less than 8 minutes we were back at the hotel.

Quickest shower, hair dry and dress I have ever performed.

Quick brush of Vicky….. And we were ready !!

The only bonus of this mad panic was that the nerves I had been feeling all day had gone, I didn’t have the time to remember them. Thank goodness!

The coach is heading through bright coloured streets, flashes of Christmas decorations, The London Eye (I overheard someone say behind me say). Then we were at the Hilton. THE HILTON. The Christmas tree in reception was huge, thinking colours and lights. Guests were wandering around. People crowded around people asking for photos and autographs, while I found myself amongst the crowd, feeling the loneliest I have felt in a very long time. Oh, so very very alone.

A member of the guide dog team came into me, introduced themselves and offered me their arm. I was guided to the lift, up several floors and into an area with a coat check. Coat checked in, then the arm was offers again and I was walked into a large ball room, handed a glass of fizz and introduced to people who’s names I didn’t recognise and faces I couldn’t see.

It was a whirlwind of introductions, explanations of why I was there, what type of dog Vicky was and warm wishes of ‘good luck’ before being walked through to the main event. The stage was set with bright white Christmas trees, the room had a blue ice illumination to it and the tables were set with far too much cutlery and a very heavy, thick white table cloth.

The feeling of loneliness and dread filled me again, I felt myself beginning to feel anxious and clammy. That was when I found a trustee for guide dogs by my side pouring me a glass of water and reassuring me that they were there to help, with anything I should need.

I welcomed the water, quenching a thirst I wasn’t even aware of and then he offered to pour me a wine, white or red? Or both? I said I would never be able to see the white, so best make it a red.

And the rest of the evening was a whirlwind of fundraising, silly entertainment, singers and then …. The awards.

The first award was for an individual or group that had supported guide dogs, I don’t remember the name of the award. Because it was the moment I realised that Vicky wasn’t the winner of her category.

How did I know you ask?

It was simple, the winner of the first award had a short video all about what they’d had done.

I hadn’t done any video recordings.

I was gutted, so very very gutted. 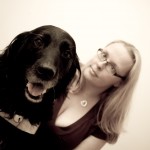 Today marks Five Fabulous Years since I was signed off as having qualified with Vicky, my guide dog.  In that time, she has given me so very much, at a time of sadness, sorrow and increasing darkness, she has given me love, support, companionship and above all else….. Independance.

Without her guid are readding ing me, protecting me, showing me the way, I honestly feel that the darkness would have taken over, and it is propable that I may not even be here today to tell you these tales.

I know you, you are reading this thinking “she has sightloss, its not terminal.”  Which yes is true, but with my sightloss, came depression.  And if not treated, it can become all consuming and that can be a terminal illness.

I’m not here to talk of that though, I am here to talk about how much I have gotten from my gorgeous guiding girl.

She is a dog, YES.  But actually, she is a walking, breathing, living mobility aid.

Without her by my side, I wouldn’t be leaving the house.  I wuldn’t be able to take the kids to the park, I most deinately wouldn’t be contemplating returning to Uni next year.

As my guideing star, a friend has nominated Vicky for an award with Guide Dogs.  She is in the final 3 for the ‘life changing award’ to be decided at the annal Guide Dog Gala Dinner, to be held in December in London.

Me and Vicky have been invited to the awards ceremony, which if she wins her catagory, she will also be put forward to be crowed as Guide Dog of the Year.

I am very excited, to win this award wold be fabulous recognition of all that she has done for me.  I already know all of this, so if the judges don’t pick her, it won’t change my ove for her and my appreciation for having her by my side for the past five years.