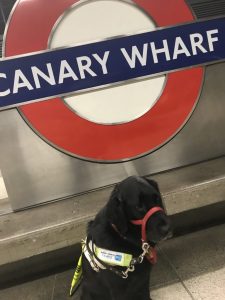 The first tube is set to leave Heathrow Terminal 4 at 05:03 hours.

I’m not sure if it was nerves, adrenaline, or lack of sleep; but I was feeling odd. It was January, yet I wasn’t needing to wear a coat. I was in London, yet I didn’t have my faithful guide dog with me. Oh and i was about to attempt completing the iconic, London Tube Challenge.

A challenge that sees it participants undertake travelling to and through each of the 270 London Underground Tube Stations in the fasted time possible. I wrote about back in December “Having previously gone up, it is now time to go down.”

I’m sure at this point you are asking yourself the simple question: “Why?”

And honestly at the unearthly dark hour on a January morning it is a question I asked myself continuously between waking and going down to the hotel lobby.

No backing out now; my sighted guide and Tube Challenge Guru Andi James was waiting for me. This challenge was all set on a series of ‘IF’s’.

All it took was a tube line to be closed or a signal failure and the whole thing could be off before we even got passed the first hurdle. Then there were the stations where how quickly we changed tubes would be important and then there was the matter of those ‘end of line’ tube stations that would require us to jog to enable us to make the next connection.

After loosing my Oyster card on a tube somewhere towards Baker Street, several bus journeys and one rather eventful run that saw me go over the top of a concrete bollard, we had had Lady Luck with us.

And the hardest part of the day was ahead of us.

The walk from the final tube station to the hotel for the night.

It was probably less than 20 minutes, but it felt like I was wading through treacle. There was no rush and after 18 hours and 38 minutes my body was done! We finished the route with 268 stations completed. Because at 23.35 hours we had run out of time for the final little branch.

In addition to travelling on each of the London Underground’s Eleven lines, there had been numerous buses and a first for me of travelling on a London Tram.

2 stations short at the end; however I felt proud of what I had achieved. I also felt incredibly grateful to Andi as my guide. At points he completely re-routed us to work around time slips that had occurred.

He welcomed me into the secret society of Tube Challengers and it is out of respect for him that I have deliberately not included the route that we took.

And even though Guinness World Records had informed me just days before the challenge that it would not be able to counted as a challenge attempt, i am still buzzing to know that I did it.

Me shamelessly asking for donations for my Just Giving page, www.justgiving.com/fundraising/tinkobell270