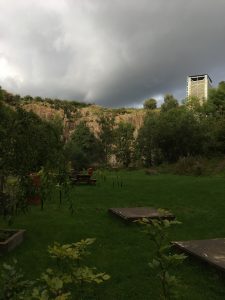 Ratho is ingrained on my memory; it is where it all began; it is a place that until this weekend I had only ever been once before.  But my memories of it didn’t disappoint me.

Although, sadly my sight and hearing did.

What is so special about Ratho I hear you ask?

Ratho is the home to EICA or Edinburgh International Climbing Arena.  It is where my journey REALLY began with my climbing.  The date was  3rd September, 2016.  Yes I did say 2016!

However, it would take until 9th September 2017 to really realise it.  You see, this is the date that I made my second visit.  The visit that was filled with mixed emotions, anxieties and fears.  But for very different reasons.

And it is because of this that this visit where I felt much more so than ever before that I was alone.

Obviously I wasn’t literally alone; I was surrounded by 43 other paraclimbers, who included my best friend and CPC (Climbing Partner in Crime) in addition to about 400 other climbers, spectators, Scottish Mountainering and BMC staff.

But still I felt alone.

Wizz back to that date in 2016 and I found myself at my very first Climbing Competition; totally ill-prepared and in a much poorer condition to that of the climbers all around me.

But I had a rucksack full of nerves and a naive mindset that I wasn’t troubled by it.  Again my CPC was there, he having not signed up to compete, he who subsequently volunteered to be a belay and judge for one of the climbs.  Leaving me to face this adventure alone.

Although it wasn’t until Saturday I realised just how much I had taken that to heart and how much I needed to summon up the same courage I had had the previous year.

This year I KNEW Ratho would be different.  Not physically (although yes the climbs would be set differently) but for me, One year later I now wear hearing aids, my sight has detereated even further and my physical and mental strength had changed.

The changes in my physical strength and my climbing capabilities are most definitely a positive and I couldn’t wait to push myself on the climbs.  However with my sight and hearing changes, my mental state was in a questionable way.

It was such a way that I couldn’t face explaining or mentioning it to my CPC, Ratho this year held its own challenges for him, he didn’t need to deal with my Sh*t too!

You see, last year he started the competition at Round 2.  So, although he had been to EICA before, he had never climbed or competed.  This year is also the start of the competing calender for his son.  Who has NEVER competed before and although he loves to climb has a great fear of heights.

My CPC needed to be their for himself and his son.  Not me.

After all, I am a grown woman, I didn’t ‘physically’ need him there to partner me, as the belayers where also judges for the competition.

But for the first time in a very long time I found myself surrounded by familiar faces, yet standing alone.

This was my demon on Saturday, not the fault of anyone else, most certainly not my CPC’s, my other friends or even fellow competitors.  It wasn’t even my ‘fault’ it was just a demon that was with me.

And one I was desperate to ditch before the competition began.

One ‘thing’ I have noticed is that I often only see (yes I know how ironic that sounds) the changes in my sight when I return to something or somewhere that I have been before, but not for some time.

On a day-to-day I don’t ‘notice’ the changes.  It is when I go somewhere or go to do something I haven’t done in some time that I notice it.  The main reason for this is and ‘perks’ to my sight is because the deteriation occurs ever so slightly, and the sight that I have left is so minimal that no change is ever obvious.

It is for this reason I have yet to return to my university town of Nottingham (that’s a whole other story though, for another time).

I dread being able to detect the changes.  And if I am honest, I really didn’t think that in ONE YEAR Ratho could be so different.  I had forgotten that although I was under the care of the audiology team, I was unaware of the exact change to my hearing.  I most certainly was not aware that I would be needing hearing aids.  So, it is no wonder that by changing the ‘sound’ of the venue, I inturn realised how this visually changed the whole venue too; before even adding in the confirmed deteriation I had been told of at last weeks eye clinic appointment!!!

I took myself away, I left my CPC and fellow competitors.  I (guided by Fizz) escaped to the tranquility and safety of the gardens of Ratho.  Being built within a quarry you end up entering the building at the top and walk down into it, meaning that the garden is almost level with the main climbing floor.  There was the odd person about, but more importantly there was silence.  There was birdsong, which I didn’t remember from last year.  And there were great big slabs of rock to sit on.

And sit on the rock I did.

I sat and I cried.

I sat and I felt myself falling apart.

I sat and I reminded myself to breathe; to control my demon and just allow the emotion to wash over me, yet not allow it to control me.

I sat for far too long, I missed the start of the comp, I missed the group photo, but I was also able to leave the emotions that had gradually been bubbling under the surface behind in the garden.  I was able to let them wash over me, but not control me.

I sat and I focused.

Sod not being able to see the faces of my friends.

Sod not being able to see the walls as clearly.

After all, I am a visually impaired climber, no one in the competition would be worrying about me; they were all too worried about themselves and their own performances. (It’s human nature and self-preservation)

So I took a deep breath and returned, plastered on a smile and ‘acted’ the confident climber; I ‘acted’ the inspirational climber with the shear stubborn nature that others had previously commented on.

Oh…… And more importantly……. I CLIMBED