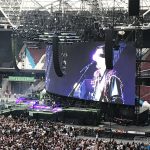 Last year I was very lucky to be able to attend several gigs, and pretty gigs at that; with Adele, Muse, Red Hot Chilli Peppers and even Placebo.  All of these took place in London, a capital known for its security and safety record.

Several weeks ago, a terrorist targeted a Manchester gig.  Men, women and even children were caught up in this horrid act that resulted in 22 deaths and many many more suffering.

I am in fear of this happening at a gig I go to.

I am in fear of putting my friends in danger, because of the additional support they afford me.

I am in fear or letting this fear stop me.

Followng on from the Manchester attack, London saw a savage attack just last weekend.  Where a van, usually placed on any street in the country was used to mount the curb and drive into Londoners who had been out enjoying a Saturday evening.

My next gig is in London in just a few weeks.  It’s on a Saturday.  It’s also at venue I have never been before.  By the nature of a gig, one especially that is SOLD OUT.  There will be an increase security presents to enable ease of movement for gig goers arriving and leaving, especially with additional support in the nearby tube and railway stations.  I am also aware that many concrete barriers have been erected around London at key locations, such as The Bridges that cross The Thames to make it more difficult for a vehicle to be used as a terror weapon.

In wake of the terror attacks, plenty of advice has been given on RUN. HIDE. TELL.  This is the bit I fear.  What saved many people in both of these attacks was the ability for them to see the danger, see an escape route and to see those who needed help.

So, how do I cope in such a situation without the ability to see?

I know that they would never leave me, but what if by helping me they are put into the way of danger?

What if me being with a guide dog appears as an easy target?

All these questions and fears are building up.

I don’t think I would ever have the answers, but in writing my blog I hope to ease my own fears and ease the fears of those around me.

My friends will walk with me and support me in the same way that they have in the past.  My vulnerability will also stand out to our police men and women and other security forces.

Some of my fellow friends with both hearing and visual impairments have said that they have felt additional support has been afforded to them especially in London since the weekend.

I am not going to make this blog about the terrorist that committed these crimes.  Because after all the whole reasoning for many acts of terrorism is to divide and terrorise people.  And iconically both Manchester and London have actually ‘come together’ supported each other and shown just how great they are as a whole at supporting those who need the support.

So, I have told you my fears, I have explained them, I am not able to completely dismiss them, but I am able to understand them.  I am able to know that they will not stop me from going to London, or any other city for that matter.

I may just make sure more so than usual that my phone is charged and my additional battery pack is also charged.