Loosing Control or rather Rethinking that Control

Loosing control is just two words, saying them is the easy part; actually allowing myself to do them is a whole other story.

Control can mean many things to many people; for me control it is organising, planning and reducing the opportunity for me to feel ‘out of control’ in a situation, because when it comes to my sight and hearing loss I don’t have any control.

It is why I have been known to walk a virtual route of a new area with the help of Google Maps and Google Streetview. It is also how I can appear confident and independent; When actually most of the time I am neither, I am just simply prepared.

And for the most part, this tactic works.

Then……. Then I do something I never expected to feel out of control with and so ensued a moment of vulnerability. (Or rather a good 10 minutes) and I find myself overrun by emotion.

What was I doing? I hear you ask.

I was out for a bike ride on my tandem, something I have done many times before, in an area that I know incredibly well. Which maybe is why it hit me so hard.

We were on a cycle path, not the main road, yet as we approached a set of traffic lights the turn felt wrong, so I tried to stop it, which anyone who has ever been on the back of a tandem will tell you is damn near impossible!

So we wobbled, my feet came off of the pedals as did my pilots and although we didn’t come off the bike completely it could easily be classed as a ‘Near Miss’

Hence my upset and emotion.

Thankfully my pilot knows me well and in the middle of this simply said:

You’re in control of what you get to enjoy and feel relaxed about. You control the route we take, I’ll help with the rest.

We do all this as a team. I’ll brake, change gears and steer, I’ll keep us safe.

The worst part of it for me was that because I had panicked, because I had lost control, my pilot could have got hurt and when I said this mid snotty-sob he simply replied:

Which made me realise that as a team…. We did.

Because of my lack of sight and hearing, it only goes to follow that my balance and perspective is greatly altered. It was this that had sent me into my moment of panic. And from that point on, on the ride I simply listen to my pilot, pedalled harder on the up-hill and let the bike coast on the down-hill. All while trying to enjoy the view.

And now, back with both feet firmly on the ground I can reflect. And realise that this was an inevitable, because I needed to accept that being on a tandem IS a team effort, No matter how good my sight, even I wouldn’t be able to do it on my own. So rather than look at it as a ‘byproduct’ of my disability it is time for me to rethink cycling. Cycling is something I CAN do; I just CHOOSE to do it a part of a team.

After all, the benefit of being on a tandem is that you are only 50% responsible for getting up those steep hills! 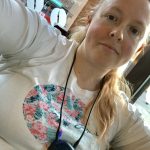 The sun is out and so are the sunglasses!

This leaves me feeling a little ‘vunersble’ though.  You see I have continued to wear my glasses as a way of ‘hiding’ even though I gain very little from them when I am out and about.

It is a comfort, because I don’t like how my eyes look.  Having always worn glasses it feels like I have huge dark circles around them, that they are ‘sunken’ within my head.  And because it appears more ‘obvious’ that I have a sight issue when people can see the continual movement of my eyes.

Team these ‘anxieties’ with the fact that I feel that my hearing aids are ‘HUGE and OBVIOUS’ when really they aren’t and you can see where my self-consciousness comes from?

Today though, today was a small victory kinda day…..

Sat enjoying a cuppa, tea it’s Fizz curled up at my feet; it was only when a woman tapped me on the shoulder that I realised I was being spoke to.

You see, not only did I have my sunglasses on my head, butI also had my ‘Amplicomms’ personal T-Loop system around my neck like a large lanyard.

Today for the first time in a long time I am also wearing my hair up in a ponytail (instead of the usual plaits) which to me makes it feel like my hearing aids are in full view of everyone; when in-fact they are hardly noticeable!

So, pausing the book I was listening to, I apologised to the woman for not hearing her and it was very pleasing to hear her reply

“I would have never guessed you had hearing aids in, or that you couldn’t see me, I couldn’t see you wearing headphones; I just thought you were ignoring me!”

Maybe I am the only one who feels self-conscious like this, or maybe this is a ‘common’ feeling amongst those with sight loss and hearing loss.

Either way, a strangers comments made me feel slightly happier with myself today.