I umm’d and argh’d About writing this post; then I thought

“This is part of me, I should share it.”

last week I received an email that has taken me completely by surprise.  I have been nominated for an award.

But not just ANY award, this is for The National Diversity Award 2018 in the category of Positive Role Model.

I do not know who nominated me, but it has left me feeling slightly emotional and speechless.

Under the terms of the nomination it is for me to now write a Bio and supply supporting evidence as to why I feel I am deserving of this award.

Yes, I have no trouble talking or writing about myself; but in this way?  I’m not so sure.

But I am of the thinking that if I don’t at least try, then I will be disappointing myself and the person who nominated me.

So I am slowly working through the forms I need to complete.  And am sharing this nomination with you all, in the hope that you too agree with it and wish to vote for me?

You can cast your vote here National Diversity Awards 2018 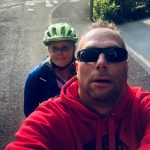